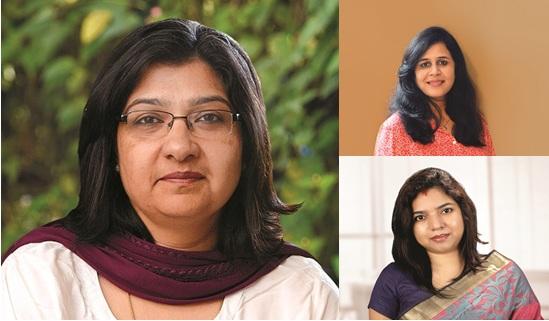 Three women IT leaders share their stories on how to break through the middle management frenzy and leap ahead.

In the late 19th century, it was the suffragettes, members of the women’s organizations in the United Kingdom or The Women’s Indian Association (WIA), who fought for the right of women to vote.

Today, the idea of mutiny seems a bit farfetched.

However, women are still underrepresented in the workforce. According to UN gender statistics, India is one of the few countries where the rate of participation of women in the workforce has drastically declined in the last decade. It fell from 33.7% in 1991 to 25% in 2016.

For years, we have tried to break the glass ceiling and rise to the top. We have held our heads high and played by the rules. Our ambitions have been as big as the men in the workforce; sometimes even bigger. We have accomplished our goals through hard work and dedication in constant pursuit of excellence. We haven’t allowed family pressures to come in the way of our work. Some of us have remained single such that our work doesn’t come in the way of professional success. Others have married and borne children and taken care of an array of responsibilities thereafter.

And yet, the men around us have continued to get promoted faster and get paid more. Our aim is not to nitpick but to get to the core of the problem. The numbers are proof.

According to a 2016 International Labor Organization report, women in India earn 33% less than their male counterparts. Not only that, Indian women are also over-represented in low paying jobs. In fact, women make up 63% of the lowest earning Indians but just 15% of the highest paid ones, making such an uneven representation of women in workforce, contributing to one of the worst gender gaps in the world.

At the top, especially, women are nearly absent. To ensure gender diversity in boardrooms, two years ago, Securities and Exchange Board of India (SEBI) asked all listed firms to appoint at least one woman director on their boards. A year later, several large enterprises had failed to meet this requirement. A handful of popular women directors in India Inc, namely, Kalpana Morparia, Naina Lal Kidwai, Falguni Nayar, and Shyamala Gopinath — all of whom have had long professional careers and held top jobs. The percentage of women CEOs in India at about 12.9% fares better than the average for APAC and Australia as well as Europe and America at 7.8%.

So why aren’t there enough women leaders in enterprise IT?

In order to address this raging question of our cover story, it was important for us to present the status quo, that is, women in India, yet, don’t makeup half the workforce, and that there aren’t enough women in leadership positions.

In our research, we found that the challenges faced by women IT leaders, to a large extent, aren’t different from women in other fields. Whether it is children or elderly, who are capable of changing the course of their careers or it is the pressure to maintain a balance between home and work lives, these are critical factors that impact a large number of women in the workforce. It is also the impression of IT being a difficult and demanding profession that a large number of women switch their careers after the balance becomes difficult to maintain for women IT professionals. Especially, women leaders in middle management.

The leaking pipeline is a serious impediment that impacts the density of women at the top layer. And there’s a dire need to fix this leakage.

However, there is some good news.

Statistics from HeadHonchos.com, an Indian job search and career portal, states that the number of women with technical degrees (or equivalent) has grown remarkably. What is more heartening is that women engineers in the Indian subcontinent have increased by a whopping 326%. The hiring of senior women IT leaders increased by 29% last year, the middle leadership band has seen a 35% growth. According to Sandeep Vadnere, VP – Engineering & Product, HeadHonchos.com, “In the last 3-4 years, there has been a lot of awareness in India and the world over women in tech and special programs have been introduced to recruit more women especially in the US. We have also seen a lot of the MNCs, financial captives as well as Indian IT firms keeping up, primarily to meet their gender diversity goals.”

At the NEXT100 awards last year, 7 out of 100 winners were women. This is a gross improvement in the last five years in terms of the number of women who have applied and won. We bring to you stories three women IT leaders who tell us what it takes to step up from the middle rung and shoulder top management roles.

Having Indra Nooyi, CEO at PepsiCo as a mentor, can be a tall order to maintain. Not for Priya Dar, Head – IT Applications at Godfrey Phillips India. For someone with over two decades of experience, Dar has seen it all. She has dealt with bad bosses in the early stages of her career as well as handled family and childcare issues, but it never once deterred her to give up her career. “Why should I give up something that I enjoy doing and have worked so hard for?” asks Dar.

A firm believer of gender inclusion in the IT workforce, Dar believes that embracing diversity helps drive success and competitiveness within teams, functions and organizations. Today, Dar works with a lot of women in various IT roles such as development, functional, risk assessment, audit, and security management. “It makes me happy,” she says, to see women in IT take up leadership responsibilities.

According to statistics from HeadHonchos.com, women are likely to be hired the most in the field of HR (35%) and finance (15%). Unfortunately, IT still lags behind at 13%.
At Eveready Industries, Swarnali Ghosh, Senior Manager – Business Applications is one of the few women in the manufacturing company to have endured a career in IT. “Women need to try harder to make themselves visible for technical as well as leadership skills.” Ghosh’s IT career began over a decade ago at Eveready when she decided to walk the less trodden path. Around that time, more women were joining the tech workforce – a trend that has gradually improved in the last decade or so. “Ever since, I haven’t once thought that I had made the wrong choice.”

When Saloni Vijay, Head-IT at Vodafone Mobile Services, joined the workforce over a decade and half ago, she was the only woman in the male-dominated IT team. A young and determined Vijay took charge and fought her way forward. She never thought of herself as a single woman then, or when she became a mother. Strong willed with an equally powerful support system, Vijay juggled between work and family. “While I worked, my partner shared the responsibility at home,” says Vijay.

Like Vijay, Dar’s partner also took care of morning rituals and helped her with child care. Even her parents and in-laws helped when they could. “I was one of the lucky few who asked and got help,” says Dar. Her organization allowed her flexible working hours and work from home facility. In a society like ours, the onus of all these factors comes directly on the woman and hence, the career takes a back seat. “This is a choice that a working woman has to make,” says Dar.

And if the choice is work over home, women in IT must be ready to toss and catch. “In the absence of a good support system – family and at work – a lot of women take breaks; cuts work hours, takes sabbaticals, that does impact their career goals,” says Dar.

After the completion of her maternity leave, Vijay made sure that she asked her bosses not to hesitate giving her more responsibilities. Fondly remembering an incident from the past, despite her boss’s protest, Vijay carried her toddler to work; while the baby slept peacefully, Vijay made sure that the scheduled server upgrade took place successfully under her leadership. “I informed my management that – whatever the circumstances – they shouldn’t underestimate my dedication towards my work and career,” says Vijay.

Since 2005, the percentage of working-age Indian women who participate in the labour force has dropped by 10%, the largest drop of any country in the world. In contrast, the hiring of women engineers has grossly improved. In 2001, while the country had only about 4.8 lakh women engineers, this number grew to an astonishing 20 lakh and over in 2011.

“Women must make themselves visible for the right skills and projects, and to the right people if they want to advance into senior leadership,” says Ghosh.
Women, especially in enterprise IT, says Ghosh, must be vocal about their goals and ambitions, and this is one way they can deal with implicit bias.

“The other thing is that even organizations must acknowledge the bias,” says Dar.

“Consciously or unconsciously, we are discriminated against and when these things come to light they have to be dealt with the same importance that any other labour matter or such would be dealt with. Just pushing it under the rug does not work anymore”, says Dar. Her company, Godfrey Phillips runs awareness sessions for employees, “and that is something all companies should run on a timely basis,” she says.

Even at organizations, Vijay says, it is very important to introduce programs that are aimed at increasing the representation of women in IT leadership positions.

“The programs should focus on how, both men and women, can come together to support each other, regardless of your gender identification,” says Vijay.

“I have been lucky to find a few good mentors in my career and I attribute all my success to them. Having said that, we also need to reach out to the mentors and this is where women need to step up. I believe if we reach out to seniors in our organizations, business, network and we own our own mentorship, we can achieve far more than expected,” says Dar.

Finding a good mentor while traversing the middle to higher management route – women in enterprise IT must look for a mentor who recognizes the talent in you and encourages you to keep moving ahead.
In order for that to happen, Vijay says, “women, like men, must upgrade and sharpen their technical skills and build their reputation as a worthy protégé.”

Ghosh at Eveready found a good mentor, a little later in her career, but that hasn’t look back ever since. For women who aren’t fortunate enough to find good role models in their organizations, Roy says, “women in enterprise

IT must continuously evaluate themselves in terms of where they are, and where they want to be, every 5 years.”

“Whether you find good mentors or not, charting a growth trajectory in enterprise IT is extremely important,” says Vijay.

According to Dar, a strong partner and vendor community is also essential so that good programs are shared across and all learn from the successes.

“We women are so afraid of making mistakes lest someone tell us we are less of a mother, career woman, daughter, and daughter-in-law. Don’t be. Go out there and face challenges, make mistakes, and emerge as winners,” says Dar.

As someone I know once said, choose your battles, and if it is to make a career in enterprise IT, then charge ahead, and never look back.